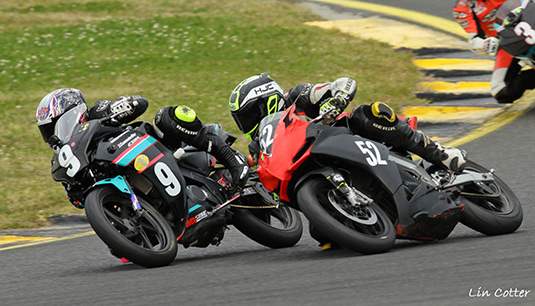 Round 4 was run on the full Gardner GP circuit on a dry overcast winters day and once again there was excellent close racing put on by the Bucket racers. 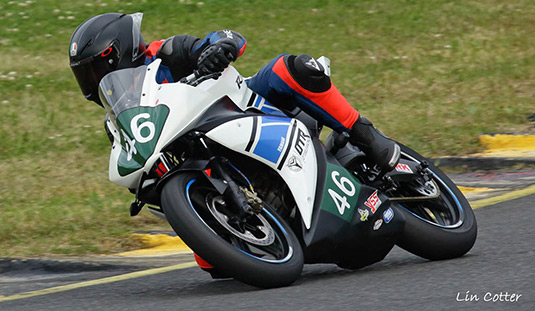 With #120 Nathan Taylor not making the start, again #46 Mark O’Toole went out the winner and # 11T Alex Tamras crossed the line in 2nd. #94 John Olip brought his Moriwaki 85 home 3rd. first 2 stroke home.
The podium finish positions for the day was as Race 3. 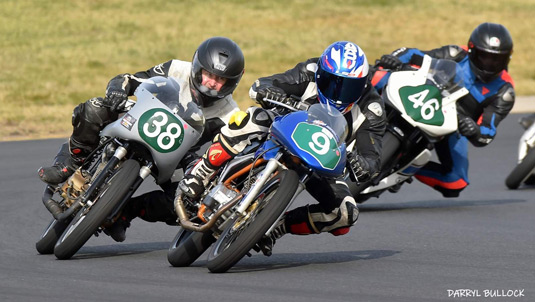 #9 Blair Briggs #38 Junior Murphy and 46 Mark O’Toole in close formation typical of the racing put on by this trio.

#9 Blair Briggs (Honda CB185E Big Bang Race Engines) Continued on his winning ways winning the slip streaming battle to the line with #38 Junior Murphy (Honda CB185 BBRE) losing out by half a wheel. Tim Smith didn’t make the start due to an engine problem.

Off the line #9 Blair made a cracking start leading #46 Mark O’Toole (Yamaha YFZR150) and #38 Junior Murphy into turn one. Blair was quickly passed by Mark on the run to turn two but try as he might Mark could not break free of the two Superlites and a three way slipstreaming battle went on throughout the race.
Final Lap Junior got it just right getting the double slipstream and crossed the finish line 7 100ths of a second ahead of Mark with Blair 1 10th. further back, Blair posting the fastest lap of the trio.
John Olip generously lent his P5 Suzuki GP125 to Tim Smith who scored 3rd.

Race three looked like it might be a repeat of race two but the gremlins struck on the #9 Blair Briggs bike and his lap times started to drop away still managing to hold on to second place. #38 junior had a comfortable Superlite win over the slowing Blair. #65 Tim Smith again on the John Olip Suzuki finished 3rd. salvaging a reasonable points haul. 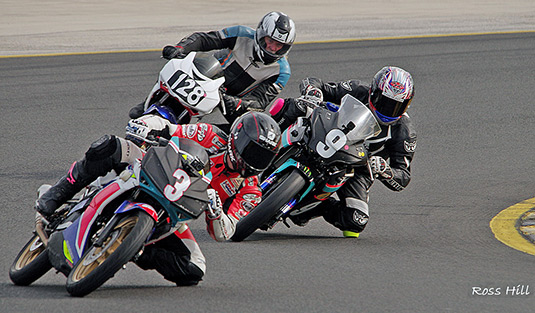 With another Lights to flag win #11Y Barry Youngs 3rd win gave him a maximum score to win the day. Along with Barry #3 Luke and #9Y Christopher locked out the podium for race 3 and the Days results. Luke and Christopher were locked in battle with #52 Carl Kitson 4th. who missed out on the final podium position by 5 100th sec. Great close racing. Next up for 5th. #128 Edward Poucher’s main championship rival #93 Jason Davies 6th.
This is the first time in the 34 year history of Bucket Racing that all podium positions have been taken by members of the same family 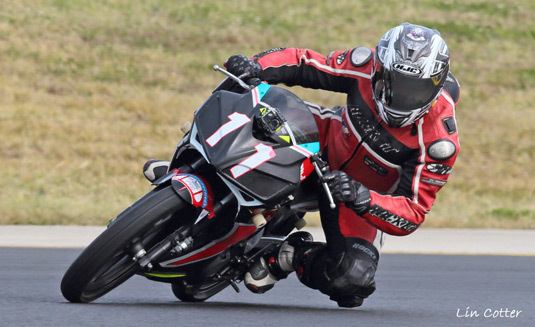 Another great days racing enjoyed by all.

Payment to the Treasurer via PayPal.Me can be made Here...

Please fill in the size required and your contact details in the Notes Message box on the PayPal Me Form.

Quantitys of some sizes are getting low so get in quick. 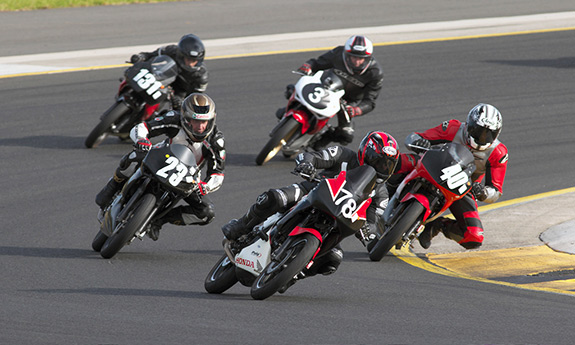 Copyright of The Bucket Racing Association NSW ©  2022 All Rights Reserved