This could be YOU!

Get yourself a Honda CBR125 or similar and live the dream, racing in the Commuterlite Class.

Commuterlite AM Champion. Adam Cameron started racing in Commuterlites in 2014 and won the inaugral AM Championship at his first attempt. It's called...


Adam will be competing in the Motolite class in 2016.


Young and old are enjoying racing in this very competitive class. You owe it to yourself to give it a go.

Round one held on the South circuit at Sydney Motorsport Park.

Although having a late start in the Year the 2016 BRA / PCRA Championship series got off to a great start on beautiful Autumn day and a large entry. A big welcome to all the newcomers in the various classes. 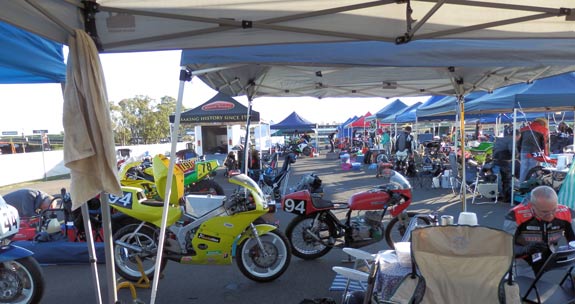 Early morning pit activity at South circuit. The sun was out, a promising prelude to a great days racing.

Qualifying for the five classes:

#888 Jack Robinson on his nicely turned out Honda RS150CRF had a great start with new bike and first race in Motolites winning race one and placing second on races two and three to finish second overall.

Everyone got away well with #60 Jason Dunn Honda RS85cr getting the holeshot. Surprise on lap one Jason was off the track at the uphill corkscrew, recovering to rejoin dead last behind the Superlites. Newcomer to Motolite’s #888 Jack Robinson Honda RS150CRF had bolted into a good lead with #73 Brodie Thackery Moriwaki 80 and #17 Adam Cameron Honda CBR150 swapping places battling for 2nd and 3rd.
However by lap four Jason had scythed through the field and was up to 2nd. By this time Jack Robinson was out of reach, winning his first Motolite race in his first ride on his new Honda RS150CRF.
Jason finished second with Brodie Thackery pipping Adam Cameron for third. #29 Harrison Wells Moriwaki 80 finished 5th with #11 Michael McLean Honda CBR150 6th and #170 Michael Child 7th.
#53 Thomas Young Honda RS85cr retired on lap three and took no further part in the event..

This time #60 Jason Dunn made no mistake with a flag to flag win. Likewise #888 Jack Robinson had an untroubled run to 2nd. Again #73 Brodie Thackery and #17 Adam Cameron was in a do or die battle for the final podium position swapping places several times with Brodie waiting until the last lap to make a pass stick snatching third by a mere 0.109 of a second.
Michael McLean came in 5th with Michael Child 6th. #29 Harrison Wells retired on lap two and was finished for the day.

Due to some delays race three was shortened to four laps. Jason had another faultless run to the chequered flag with Jack Robinson finishing a close second. Brodie Thackery this time managed to keep a small gap on Adam Cameron to finish 3rd and 3rd on the day. Brodie proved there is still life in the venerable Moriwaki. His sparring partner for the day Adam Cameron did well on what is a commuterlite with a standard 150 engine. Some go faster work is on the cards.

Michael McLean brought the red CBR150 home in 5th. Unfortunately for Michael Child his Supermono stopped on the start grid and he couldn't get it to start so no points for race three.

Tim Smith got off to a great start to the year dominating the Superlite PRO class by winning all three races and going away with maximum points haul.

Above: Tim in action on his Honda CB150 proved unbeatable on the day.

Number 38 Junior Murphy (BBR Honda CB150) jumped into an immediate lead followed by #2 Ken Lindsay Honda RSC150 and #169 Ian Gregory Honda CB150 with #65 Tim Smith slow to get away but slotted in behind the King. However by lap three Tim had dispatched Ian Gregory to 4th and on lap 4 he put away the King and Junior and wasn't headed again taking out the first Superlite PRO race of the year.

This time #65 Tim Smith made a great start leading from start to finish with Junior Murphy and Ian Gregory not far behind. On lap 4 Ian made a determined bid for second place but ended up doing some grass tracking and was lucky to hold the position. #2 Ken Lindsay was stuck in a battle with the Motolite of Michael McLean and could not break clear to join his Superlite compatriots up ahead.

Once again the the Wagus boys were hard at it with this time Kurt getting the upper hand. John Olip and Jim Murphy were in their own battle with Johns bike faltering on the last lap allowing Jim to finish 7th.

Once again Tim Smith made a perfect start but had a racy Ian Gregory the defending champion in tow and sure enough Ian went past in lap 2 and was looking good for his first win but it was not to be. Tim waited until the last lap and made a terrific pass for his third win of the day. King Kenny was holding a watching brief as the two ahead battled it out. Ken finished a close third which was a nice present to himself on his birthday.

It was a hilarious prize giving with cake and jelly shots celebrating the Kings birthday.

Junior came in 4th after battling race long with the Motolite of Michael Mclean.

Kurt and Herman Wagus and John Olip were in a three way battle Kurt coming out ahead and John getting between the very competitive brothers.

Superlite Pro Results Round One 2016

#57 Stuart Ellis on his very smart looking Suzuki 150 Won the day with 3 wins, scoring maximum points and mixing it up with the midfield Superlite PROS.

Number 57 Stuart Ellis Suzuki150 had a dream day winning all of the races he contested. #164 Darrell Francis Suzuki150 finished 2nd in the three races with Zac Perrington Kawasaki 100 finishing 3rd. What's up! not a Honda in sight.

Superlite AM Results Round One 2016:

The CommuterLite's popularity continues to grow. They are producing some incredible lap times (for the limited power they produce) and some great racing with some very talented riders emerging. The closeness of the racing is evident by the amount of races won and lost by thousands of a second.

#39 Ken Watson (Honda CBR125) was 2nd in race one and won races two and three fending off attacks from all-comers.


Commuterlite PRO Results Round One 2016:

Newcomer #7 Brodie Frewin (Honda CBR125) had a brilliant start to his first Commuterlite race to finish 5th in races one and two and an excellent 3rd. place in race three. #5 Michael lemon (Honda CBR125)  had a disastrous  first race dropping from 4th. to last. However he made up for it by finishing 6th. in the next two races.

Commuterlite AM Results Round One 2016:

Typical of the dicing in Bucket racing, always close and a lot of fun. With #65 Tim Smith (Honda CB150)  winning all the races it was left to #169 Ian Gregory (Honda CB150), #38 Junior Murphy (BBE Honda CB150) and #2 Ken Lindsay (KLR Honda RCB150) to squabble over the remaining podium positions, all three sharing the spoils.