The Bucket Racing Associations 25th Anniversary celebration weekend was a terrific get-together of previous and current Bucket Racers. The planned ride had to be cancelled as the rain just pummeled down.

However an excellent Dinner laid on by BRA President Ken Lindsay and his Mom Doreen and plenty liquid refreshments set the scene for a great evening that went on well into the night.

Sunday morning back to Kens place for an excellent breakfast and some more conversation ranging from serious to hilarious. However the weather refused to play ball and by midday everyone headed home.

Many Thanks to Ken and his Mom Doreen for their excellent meals and hospitality.

Once again current and former BRA riders excelled throughout the various classes at this unique historic motorcycle event.

The P6 125cc Class was dominated by BRA riders  #79 Stephen Kairl, #93 Paul Borg and #69 Jason Dunn finishing in that order. Newcomer Anthony Marsden finished in 6th place in his first race on an Honda RS 125 steadily improving his lap times with setup help from Col Dunn.

Post Classic 250cc. 1st. Peter Wade got his Suzuki 250cc really singing to put one over on the Yamahas.

Forgotten Era 350cc saw Stephen Kairl finish 2nd in this Class bringing his tally to 2 wins and a 2nd making him the most successful rider of the meeting.

It all goes to prove if you want to be fast, learn on and race a little-un, it's all about corner speed and making the most of the power you've got. Learning to race on powerful bikes with too much power for your ability just gives you bad habits and scares the crap out of you. Power Corrupts.

So if you want to sharpen your race craft and cornering skills get yourself a CommuterLite, Superlite or Motolite and do some real racing. Ant West, Joshua Brooks and Chris Vermulen  raced the Moriwaki 80s (Motolite) when they first hit road racing, look where they are now, good enough for them, surely good enough for you.
If you can ride a Bucket fast then your on the way! 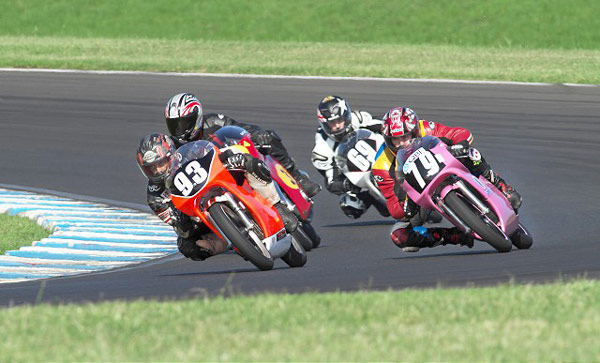 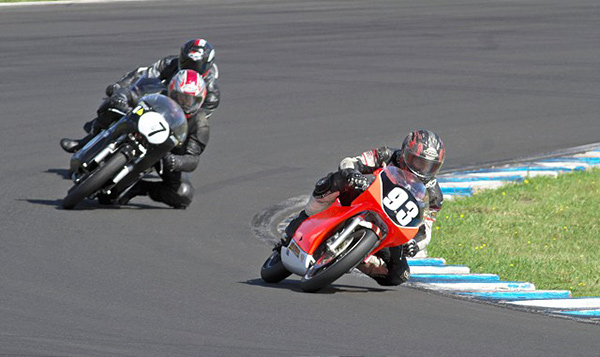 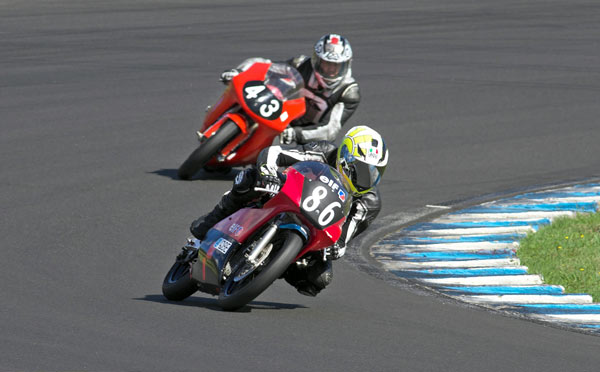 Newcomer #86 Anthony Marsden finished in 6th place overall on his  first race on a P6 Honda RS125. Anthony was pitted next to Jason Dunn. Jason's dad Col took Anthony under his wing and Anthony responded by lapping quicker each time he went out. 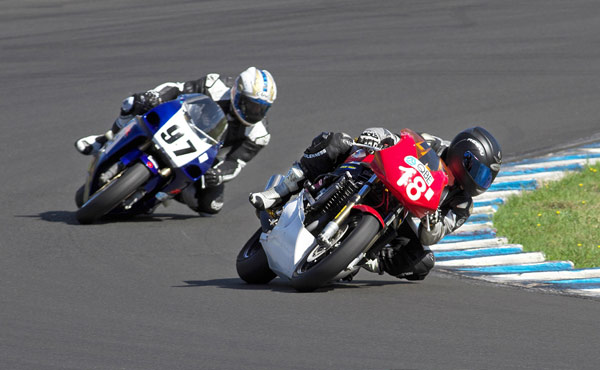 #18 Alex Pickett of Cycle Torque riding Brian Mowles  very standard Honda 900 finished in 3rd overall in the Pre Modern F1 Class. Paul Grant-Mitchell won the class with #97 Stephen Ward 2nd.
Alex and his Dad Chris are off to compete in the Manx GP at the Isle of Man later this year.
See Adrenelin Generations: Manx TT 2013